Rebels with a cause – a lesson in courage

In 2019, Publish What You Pay (PWYP) recognised the need to develop a long-term strategic approach on civic space, to support the work of our 700 members. Many of them work in increasingly difficult conditions and face growing threats in response to their commitment to transparency and justice in the extractive industries. In 2020, the Covid-19 pandemic could further increase the challenges they face.

“In my mind, the idea of running away doesn’t exist” 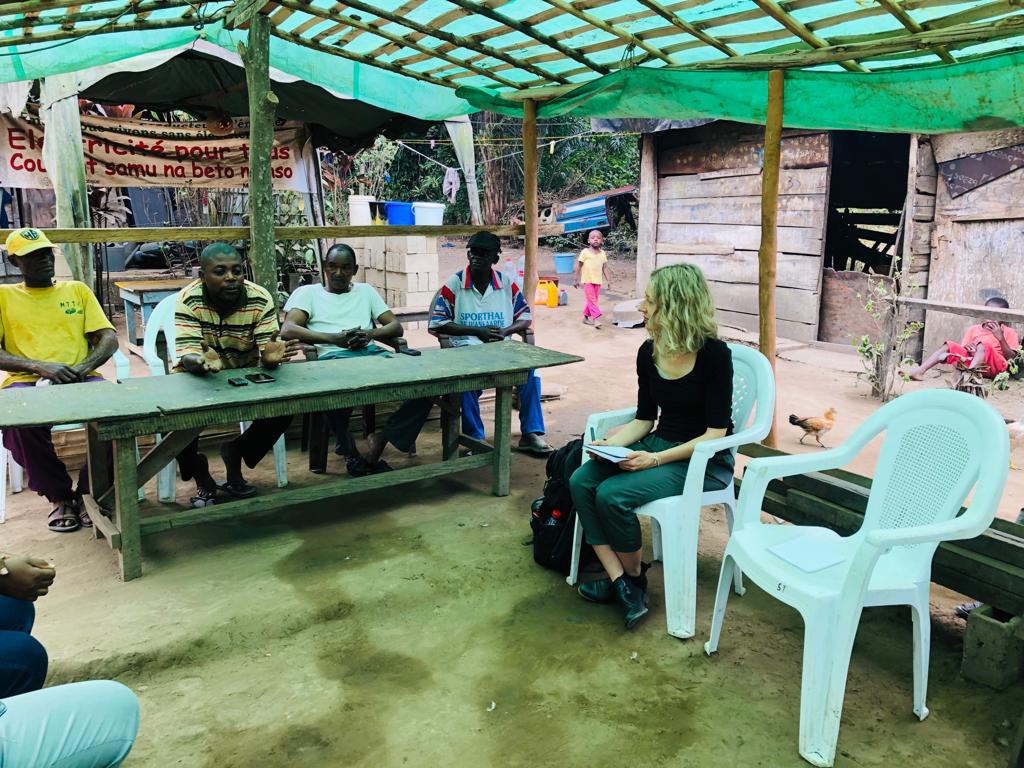 Meeting with village leaders and community representatives in Tchikanou, Republic of the Congo, August 2019.

In the era of leaders like Donald Trump and Jair Bolsonaro, in an unsettling world where many are committed to undermining democratic values that have taken so long to build, there are also men and women who are standing up and saying “no”1.

To them, the very idea of injustice is intolerable and their guiding principle is courage. Many are members of PWYP.

They should be treated as heroes for their relentless battle to ensure the profits generated by the extractive industries are shared with as many people as possible. Yet they are often dismissed through disinformation and branded as “traitors”, “enemies of the people and the state”, or “terrorists and communists”. Some are imprisoned, watched, harassed or, in the most extreme cases, killed.

Challenging injustice against the most vulnerable

Their crime? Having the courage to call out corrupt practices in the extractive industries and making a commitment to see justice, democracy and the rule of law prevail. Sometimes this is at the cost of their own lives.

The threats they face for daring to expose the injustices they witness could have made them resign themselves to it. But, like Sisyphus5 continuing to roll his rock to the top of the hill, they have all made the decision to continue their fight tirelessly. In common, they have an unquenchable thirst for justice, a refusal to be complicit and a conviction that they are accountable to society. For them, there is no conceivable alternative to speaking out.

These “fighters for justice”6 dedicate their existence to supporting the most vulnerable. They feel overwhelmed by guilt when they are not with their fellow citizens – even when they have been forced to leave to escape death, torture or prison.

But in the current uncertain times, what will happen to these courageous men and women and the injustices in extraction that affect the most marginalised?7

Taking personal risks to speak out

To find out more about the increasing attacks on members of the PWYP network, I went to two countries where members have recently been targeted: Niger and the Republic of the Congo. The purpose of my visits was to pinpoint our members’ challenges, needs and opportunities in these countries, to help PWYP identify common priorities for the coalition.

While their challenges are varied, almost all members in these countries have faced the phenomenon known as “closing civic space”8.

They are often threatened and under surveillance. They can also be arrested, detained or prosecuted for having taken part in a demonstration, organised a peaceful meeting or published a report, article or message on social media that is seen as subversive. They struggle to access information and data connected with state affairs – in particular, the contracts entered into with extractive companies. Their views are rarely considered during the development of public policy. As a consequence, they have only limited room for manoeuvre to influence decisions that affect them or the communities they represent, in particular when these are viewed as an obstacle to economic interests.

At Dakar airport, I met Alfredo Okenve, who was travelling to Spain for treatment following a brutal attack in which unknown assailants had tried to kill him a few months earlier. Despite his critical physical condition, Alfredo decided to return to his native Guinea to continue the fight. A month later, attempting to leave the country on the advice of civil society partners and diplomats, he was once more afraid for his life. When I next saw Alfredo, this time in Madrid after he had finally managed to get on a flight, I asked him if he feared for his and his family’s lives, and whether he ever thought of giving up. “No”, he replied categorically, “in my mind, the idea of running away doesn’t exist.”

As we are seeing all over the world, activists like Alfredo are operating in an increasingly restrictive legislative context. Many existing laws are subject to restrictive interpretation, while new laws threaten fundamental freedoms won previously. This further tightens the stranglehold on the narrow space granted to civil society.

The state of emergency caused by the Covid-19 pandemic may justify the adoption of legitimate emergency measures in order to contain the virus, if these are necessary, proportional and legal. However, the pandemic is serving as a pretext for some unscrupulous states to further suppress civil society and dissenting voices. 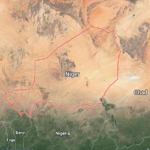 In Niger, PWYP members Maikoul Zodi, Halidou Mounkaila, Moundi Moussa have been in detention since March 15, and Ali Idrissa, currently released on bail, has received worrying death threats. Mahaman Lawali Mahaman Nassourou was released and placed on bail on May 19. However, since the beginning of the pandemic crisis, at least 1,540 prisoners have been released across the country. On 3 April, Niger’s Council of Ministers adopted a bill banning certain electronic communications in the country that, if enacted, would severely restrict civic freedoms. 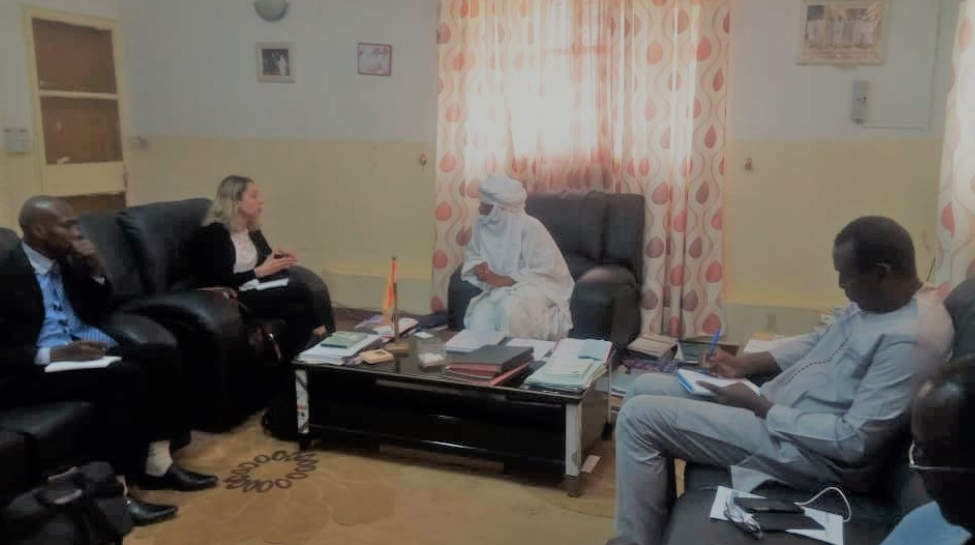 In Niamey, with the president of the National Commission on Human Rights, Khalid Ikhiri, to discuss future amendments to controversial laws, July 2019.

Apart from the threats they face and the ever-smaller space in which they operate, natural resource activists are also witness to the daily injustices that affect local populations. In Niger – which holds the world’s fourth largest uranium reserves and is ranked bottom of the Human Development Index (HDI) – I got lost one night near Niamey, wandering around dark villages with no electricity. A few metres away shone the thousand bright lights of the airport and the lampposts along a new road, built to welcome around 30 heads of state for the 33rd African Union Summit.

Outside the office of the Network of Organisations for Transparency and Budgetary Analysis (ROTAB) in Niamey, Niger, with Maikoul Zodi and Laurent Dutarte from Tournons la Page (TLP), July 2019. 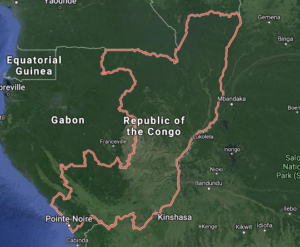 In Congo, I met communities affected by oil exploitation, where people are suffering as a result of water and soil pollution, developing illnesses that they lack resources to treat. Consultation processes have been set up, but their problems are never really taken into account. Although Congo is the third largest oil producer in sub-Saharan Africa9 and ranked 137th on the HDI, I had to queue at the petrol pump because of fuel shortages in the country.

History has continuously shown that the plagues which affect humanity fall more heavily on its least fortunate people. It is vital that these brave activists help the voices of those most at risk to be heard and to shape the world of tomorrow. 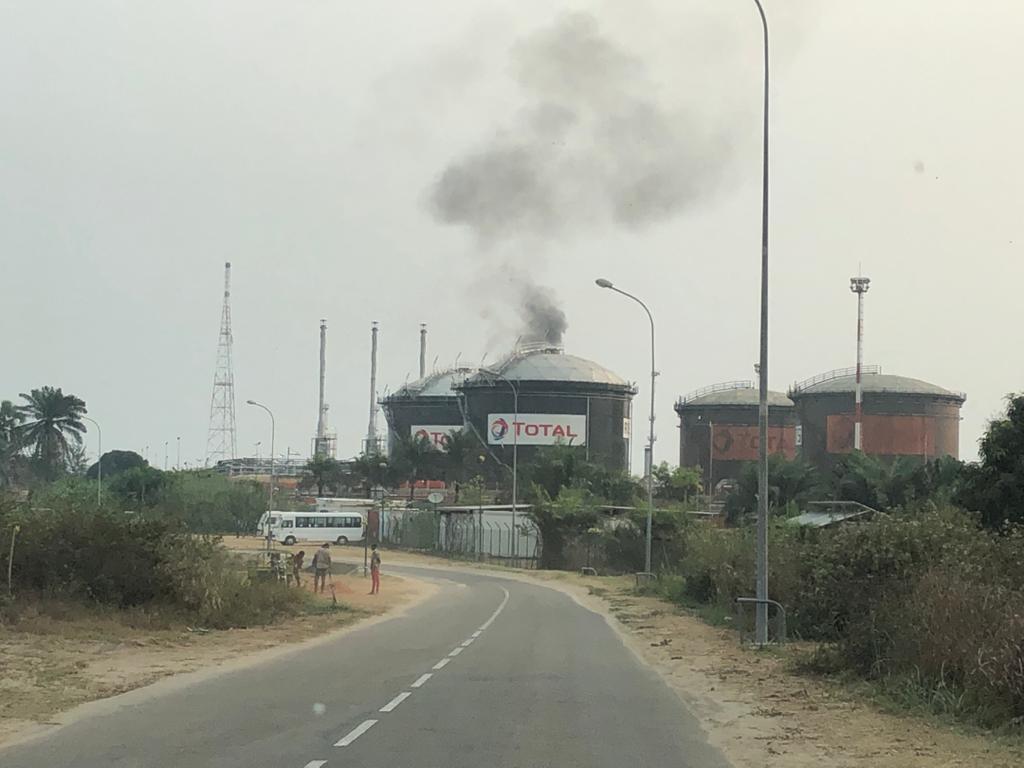 A Total oil pumping and storage unit in the Republic of the Congo, August 2019. 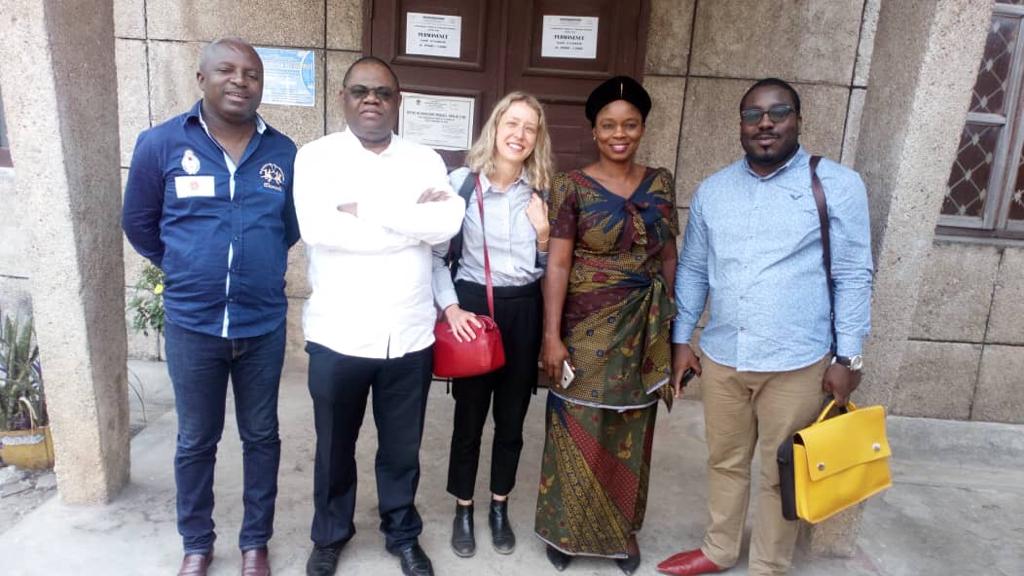 In Brazzaville with Brice Mackosso, Christian Mounzeo and Nelly Espérancia Mfoutou Kado, all members of the PWYP coalition, and Éric Bisil, PWYP Regional Coordinator for Central Africa and Madagascar, August 2019.

In these troubled times, humanity must make choices between finding innovative and sustainable ways to move forward, or regressing to more restrictive and unsustainable systems that will eventually lead to our destruction.

In periods of doubt and difficulties, it is often helpful to find answers in the thinking of great authors. Albert Camus would probably have suggested that we must look to activists like Alfredo for solutions to the challenges of our time, including the prevailing secrecy around information. He might have added that in a chaotic world, it is on the actions of these courageous figures that we must pin our hopes that justice and human dignity will prevail. This is why we all have a duty to support their struggle10.

PWYP has developed a Civic Space Strategic Framework which provides a road map for addressing threats to civic space in the extractive sector. It takes a three-pronged approach, based on 1. Prevention, 2. Protection, and, 3. Advocacy. Access the strategic framework here. 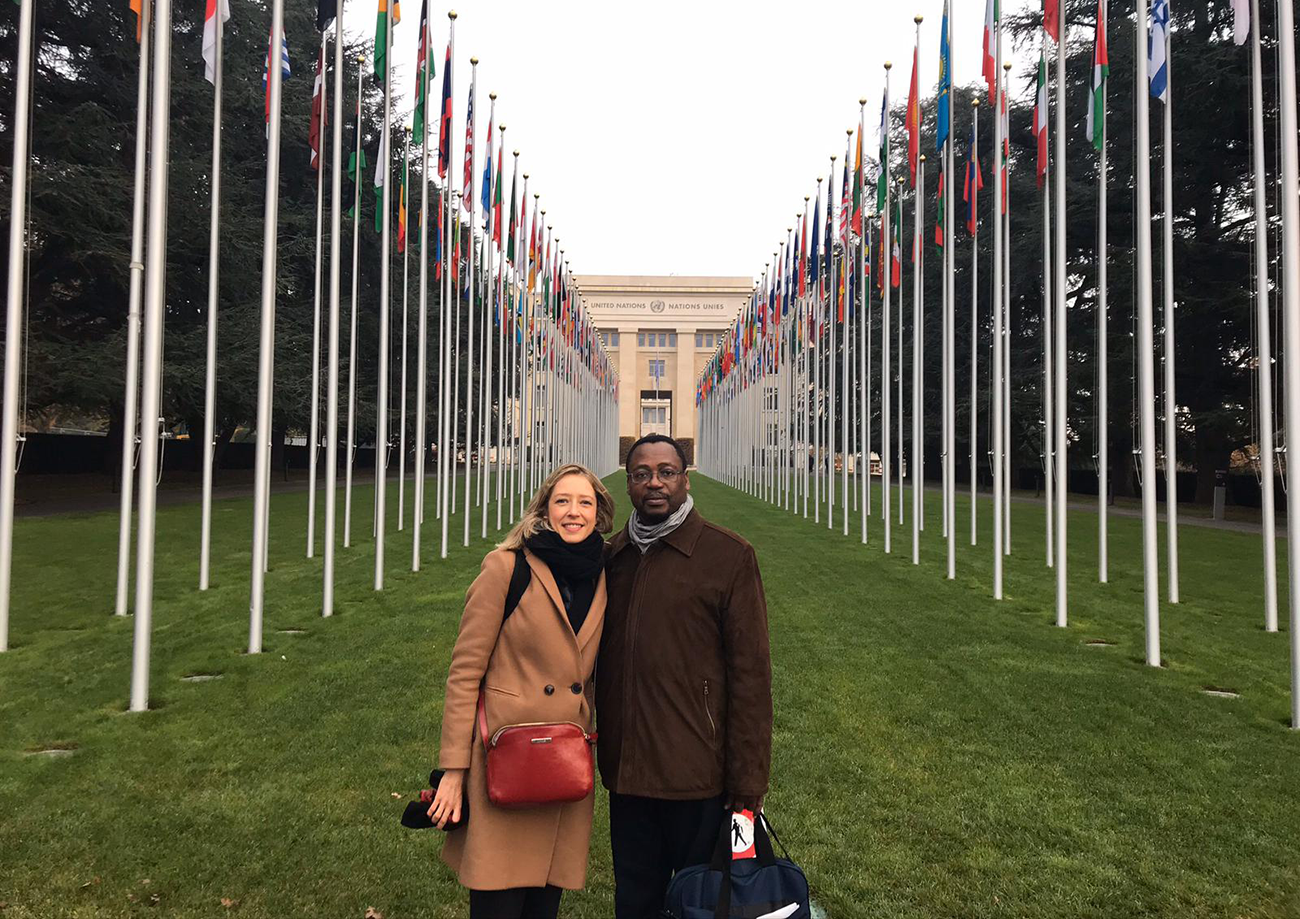 With Guinean activist Alfredo Okenve at the Palace of Nations in Geneva, November 2019.
1L’Homme révolté, Albert Camus, 1951.
2 Diocesan Commission for Justice and Peace (CDJP) and civil society representative on the Board of the Extractive Industries Transparency Initiative (EITI) Congo.
3 Peace and Human Rights Meeting (RPDH) and PWYP Coordinator Congo.
4 Evangelical Action for Peace (AEP) and minister in the Evangelical Church of Congo.
5 Le Mythe de Sisyphe, Albert Camus, 1942.
6 Les Justes, [The Just Assassins] Albert Camus, 1949: “I understood that it wasn’t enough to denounce injustice. You had to devote your life to fighting it. Now, I am happy.”]
7 The Plague, Albert Camus, 1947, “There are hours in history when he who dares to say that 2 and 2 are 4 is punished with death”.
8 In reality, an attack on fundamental freedoms, namely the right to freedom of expression and the right to freedom of peaceful assembly, association and political participation
9 After Nigeria and Angola: IMF, Country Report no. 19/244.
10 Albert Camus, La Peste [The Plague], 1947: “If the plague affects you now, this means that the time has come to reflect. The just have no need to fear, but the unjust should tremble”. [English translation by Robin Buss © Penguin UK, 2013, ISBN 0141395214, 9780141395210]
Share this content: