Brazil: In Search of Transparency

“Water shortages caused by Minas-Rio have reduced local food production. Dust from mine explosions causes respiratory diseases. Fear of tailings dam breach runs high. Rural communities suffer most. There is little evidence of Brazil’s federal, state or local governments managing the mine effectively or getting a fair deal for citizens.” Athayde Motta, Director of IBASE.

A vast iron ore mine in Brazil, owned and operated by UK multinational Anglo American, is causing water shortages, ill-health and disaster anxiety among the local population. Rural, low-income Afro-descendant communities are the most impacted.

Based on a joint research by IBASE and PWYP-UK, the report In Search of Transparency: Ending Opacity in Brazil’s Extractive Sector assesses local costs and benefits, and the environmental and human rights impacts, of Minas-Rio, the world’s ninth largest iron ore mine, located in Minas Gerais State. While the report focuses on a single mine, it also sheds a wider light on problems arising from mineral extraction in Brazil and beyond, including the Brazilian government’s lack of transparency and accountability for mining tax and royalty receipts.

The study highlights key findings and recommendations for the Brazilian federal and subnational governments, Anglo-American, civil society and international financial and multilateral institutions and donors. 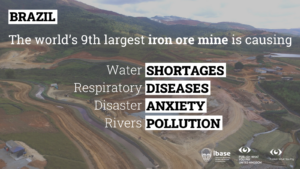 A key recommendation is for Brazil to join the Extractive Industries Transparency Initiative (EITI). Helen Clark, EITI Chair, said that this report “outlines the case for EITI implementation in Brazil – a decision which we would strongly support”.

The report also recommends that  Anglo-American undertake a comprehensive human rights impact assessment of the mine, publish and implement a human rights management plan and repeat this every three years. Technical and social alternatives to reduce the wasteful linear model of extraction, production and disposal of solid minerals, with circular closed loops for mineral resourcing, reuse, repurposing and recycling, are also urgently needed.

“Extractive companies worldwide face growing pressure to eradicate environmental and human rights violations in their supply chains and to work with host governments to ensure that benefits of mineral extraction are more fairly shared with affected communities”. Miles Litvinoff, PWYP-UK director and co-author of the report.

Read the Spanish version of the report and summary here.

Read the Portuguese version of the summary here and of the report here.

Brazil: In Search of Transparency

“Water shortages caused by Minas-Rio have reduced local food production. Dust from mine explosions causes respiratory diseases. Fear of tailings dam breach runs high. Rural communities suffer most. There is little evidence of Brazil’s federal, state or local governments managing the mine effectively or getting a fair deal for citizens.” Athayde Motta, Director of IBASE.…

Empowering communities to use data for accountability in mining

Story of change In the Philippines, the Bantay Kita-Publish What You Pay Philippines coalition (BK-PWYP) identified that EITI data could be useful in helping indigenous communities to demand their share of royalty payments from mining on community land. But making data accessible would not in itself create change. BK-PWYP realised that it needed to understand communities’…

Since 2018, Publish What You Pay (PWYP) member organisations in West Africa have dedicated great efforts to foster local content implementation in the mining sector. This has been done through the promotion of local procurement, which represents the “biggest single element in benefit distribution for communities and government”. Spending on goods and services is usually…