I attended COP 26 in Glasgow earlier this month. This was the first time PWYP took part in a global climate conference since the United Nations Framework Convention on Climate Change (UNFCCC) was ratified in 1994 – a few years before PWYP was even born.

This COP was highly anticipated as a key moment to strengthen commitments to keep global warming below 1.5°C. There is now a widespread consensus that this requires a rapid phase out of coal, oil and gas production in order to cut carbon emissions. But how to ensure that this is done in a just, people-centred and equitable way is still hotly debated.

Countries announced the phase down of coal power, the end of international public finance for all fossil fuels (worth some USD 18 billion/year), a new Beyond Oil and Gas Alliance and the acceleration of the phase out of fossil fuel subsidies. Yet, little was committed in order to ensure that developing countries were compensated for the loss and damage many are already experiencing as a result of climate change and/or supported to weather the vast socio-economic implications of a rapid transition to renewable energy.

Building on PWYP’s global position on the energy transition, we responded to the COP in a few different ways. Firstly, we drew attention to three key measures that must be taken to ensure a fair  transition: 1) clean up transition mineral supply chains 2) support low-income oil, coal and gas producing countries with technological and financial assistance to support economic diversification away from fossil fuels 3) ensure transparency, accountability and public participation in decision making processes, including the voices of those most affected by climate change and the energy transition (see our COP26 statement signed by more than 280 PWYP members). Secondly, with the PWYP Africa Steering Committee, we organised a webinar at the COP26 People’s Summit to discuss the opportunities and risks linked to the exploitation of transition minerals in Sub-Saharan countries. Finally, we also took part in partner events and made new important connections with climate justice civil society organisations.

Here are my COP26’s takeaways and how they can help shape the role PWYP must play to fight the climate crisis and ensure a just energy transition.

COP26 has been described as the most exclusionary COP of all time, notably preventing people from developing countries, young people and people with disabilities from attending key negotiations.

Those who managed to make it to Glasgow were mostly outside the decision making rooms, but this didn’t stop them from scrutinizing the debates, networking, talking to the press and on social media. By doing so, we challenged the narrative of the more than 500 lobbyists from the fossil fuel industry who rushed to Glasgow to make sure governments wouldn’t threaten their interests.

PWYP will continue to amplify the voices of those on the frontlines of climate change and fossil fuel extraction, in particular young people, women and indigenous peoples.

This year, COP delegates were expected to agree to stronger commitments than ever to meet the 1.5°C target. But they were not bold enough. Current plans will lead to 2.4°C of warming, which puts the planet and all of us at extreme risk. While the final Glasgow Climate Pact calls on countries to accelerate efforts towards the “phasing down of unabated coal power” and “inefficient fossil fuel subsidies”, this is clearly not enough. One notable exception in all this is the Beyond Oil and Gas Alliance, gathering 11 countries and sub-national governments committed to end new oil and gas production and exploration. Unfortunately,  high emitting rich countries, such as the United States, Japan or Germany have not joined.

The other failure lies in the incapacity of the Global North to secure funds to help less wealthy countries lead their energy transition. The worst illustration of this is their rejection of a Loss and Damage Facility, a special fund supported by 138 developing countries. The final agreement only mentions a “dialogue” on this that needs to keep going. Now, our eyes are turning towards the International Monetary Fund’s new Resilience and Sustainability Trust, aimed at supporting countries in their response to climate crisis’ impacts and in their energy transition. It still needs to be properly implemented and civil society organisations must be fully engaged in the whole process.

There is no time to delay. PWYP must double its efforts to ensure the Global North is acting first and fastest to facilitate economic diversification, access to clean energy, technology transfer, and decent work, in developing countries.

The question of the extraction of minerals that are central to the production and storage of renewable power (such as cobalt, lithium, copper, etc.) was mostly absent from the debates at COP26. In addition to organising a panel on Sub-Saharan countries, bringing concrete solutions to the table, PWYP signed a joint declaration and joined a protest organised in Glasgow by several organisations against “dirty mining”. One banner in particular resonated: “dirty mining can’t power clean energy”. 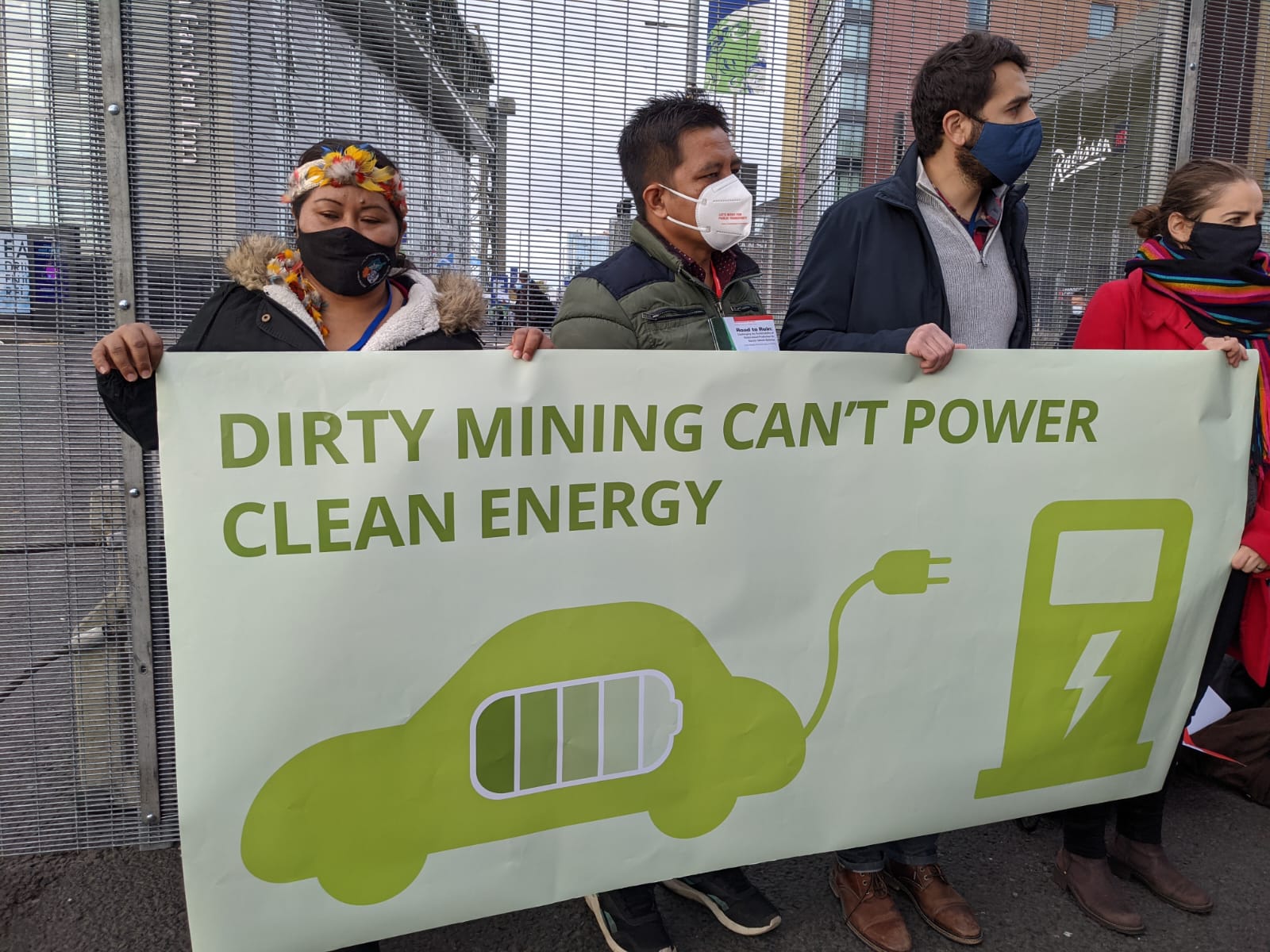 PWYP will continue to advocate for  the responsible governance of transition minerals. The Democratic Republic of Congo recently showed that this is possible, with the launch of an agreement aiming at protecting forests from mining and other causes of deforestation.

Now that COP26 is behind us,  it is time to look at the next COP, which will be hosted by Egypt. For PWYP and our partner organisations, this is a unique opportunity to contribute to the mobilisation of civil society across the African continent and the MENA region in support of a climate justice agenda informed by the lived reality of the communities most impacted by climate change. In such a climate emergency context, the struggles of PWYP members can’t happen in a silo.  We need to continue to build bridges  with the climate justice movement and ensure we march hand in hand toward the fair, sustainable and people-centred energy transition we all need.