In 2014, Niger announced that it had successfully renegotiated uranium extraction contracts with the French multinational group, Areva. While the negotiations were hailed as being a “win-win” for both Areva and the people of Niger, analysis of newly published information from Areva has called into question if indeed the benefits are mutual.

Given that it produces about 30% of the company’s uranium supply, it is safe to say that Niger is vital for Areva. Yet, in 2015, Niger received only 7% of Areva’s payments to producing countries, a deal which seems considerably less lucrative than that given to Kazakhstan, which was paid 74% by Areva for producing 37% of its supply. What is the basis of this discrepancy? 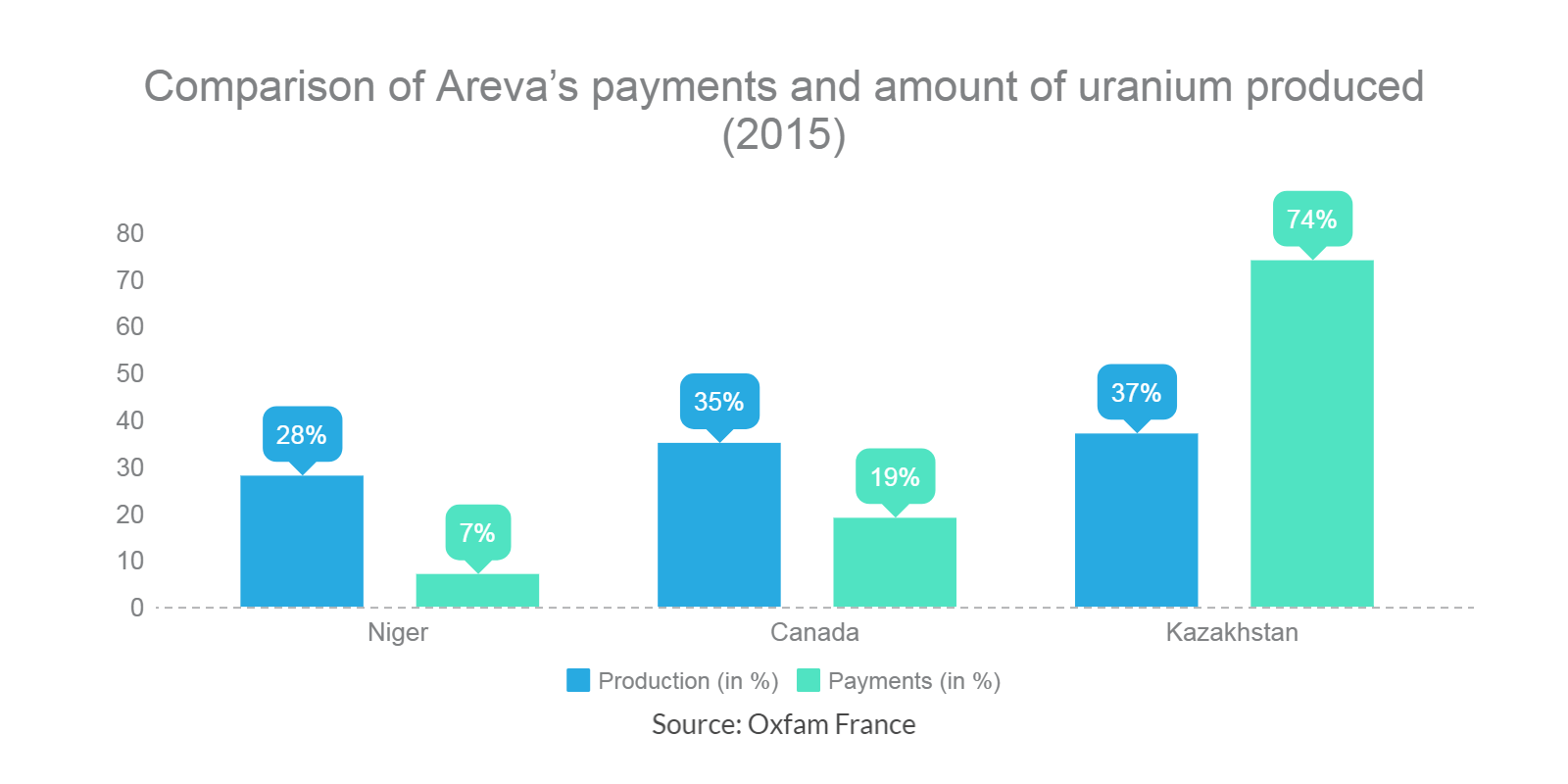 The discrepancy can be attributed to the well documented fact that Niger and Areva have a partnership which is far from mutually beneficial. In 2013, Oxfam France and ROTAB, both members of Publish What You Pay (PWYP), launched a campaign which highlighted how little Areva pays Niger in return for the exploitation of its uranium. On the 26th of May 2014, after many months of going back and forth, Niger and Areva announced that they had signed a strategic partnership agreement which renewed the uranium exploitation contracts. The agreement was hailed as a “win-win” for both parties. Prior to the agreement, negotiations between the two parties stalled for many months mainly due to Areva preventing Niger from implementing a new royalty fee agreement. This new royalty fee, based on the profitability of Niger’s mines was expected to boost Areva’s contribution to Niger, one of the poorest countries in the world. In the end, the proposed royalty fee was included in the new agreement.

Since the agreement came into effect, rather than bolstering Niger’s revenues as had been suggested, Areva’s payments to Niger have decreased. To help us understand why and as part of the Data Extractors programme, we analysed data published by Areva in compliance with recent European regulations, which stipulate that companies must publish payments made to the governments of the countries from which they extract natural resources. The payments we looked at are the first published by Areva since its contracts with Niger were renegotiated, and what we found was not promising.

Royalty fees make up the majority of payments made by Areva in return for its exploitation of uranium. So the prospect of negotiating the royalty fee agreement they had with Niger seemed promising. Yet, while the amount of uranium Areva extracts from Niger has stayed relatively the same, Areva’s royalty fee payments have decreased considerably. Our analysis found that in 2013, the royalty fee payments made by Somaïr – one of the biggest uranium mines in terms of production- was more than 15 million euros. Conversely, in 2015, payments were not even up to 11 million euros, even though production levels had stayed the same.

From the information published by Areva, we also discovered that the decrease in royalty fee payments was partly due to the decrease in the value of uranium (which is determined by the price at which Areva buys uranium from mines), which went from more than €110 to less than €79 for Niger. Because the price of uranium and royalty fee rates are inextricably linked, this decrease in price meant both the profit margins of Areva’s mines in Niger and the royalty fee payments went down. So, the decision to decrease the value of Niger’s uranium, which was taken during the ‘win-win’ negotiations, resulted in the amount paid to Niger in royalty fees being reduced. In essence, the agreement which followed the negotiations endorsed listing the price of uranium in Niger at low market rates, which does not add up when we look at Areva’s typical economic strategy. Had the price stayed the same, the new royalty fee rates would have allowed Niger to get more than 25 million euros in royalty fees from Somaïr for it uranium exploitation activities, which would have been close to 15 million euros more than it got.

Is Niger’s uranium being undervalued when exported?

By comparing the information published by Areva with that published by Niger’s customs, we also discovered that the uranium which Areva exports from Niger is valued as being worth less in comparison to that exported by other exporters of uranium in Niger. On average, a tonne of uranium sold by one of Areva’s branches in Niger to its headquarters is valued as being worth less than €79, while the same uranium, from the same mine, is usually exported for more than €90 by other companies in Niger. Selling at such an undervalued price reduces the profit margin of Areva’s branch in Niger, which allows the company to get away with not paying taxes to the government of Niger. If it were valued at a fair price, the uranium exported by Areva from Niger could have brought almost 30 million euros to the country in 2015, which could have paid for 18% of the health budget in a country where life expectancy is just over 60 years.

Our analysis helped us to understand why Niger remains one of the poorest countries in the world despite its considerable potential to generate substantial wealth from its uranium. Using the data obtained through mandatory disclosure rules in the European Union, we were also able to understand why three years after contracts between Areva and Niger were renegotiated, there still seems to be inequality in the relationship between the two partners. It is evident that more than the resource asymmetries at play during the negotiations of the contract, there was also a power asymmetry which might explain why an agreement which was clearly not mutually beneficial was signed.

Read the next article
Hundreds of mining, oil and gas companies reveal payments to governments for the first time, in Canada and around the world