Raising Global Standards of Transparency in the Extractives Sector

The new mandatory rules for large and publicly listed extractive companies according to the EU Accounting Directive (transposed as UK SI 3209) represent a significant step forward in terms of mandatory transparency reporting for the extractives sector.

Our report into the early application of these new rules explores the effectiveness of the rules in the current global context drawing on data taken from the first round of reporting in the UK, for periods beginning on or after 1 January 2015.

In conducting our research we reviewed a sample of reports filed under the new rules to assess both compliance with the regulations and the usefulness of the information published. Our research also entailed a detailed review of the legislation as well as a number of interviews with a wide range of stakeholders.
Our findings in terms of compliance with the rules were encouraging, with the majority of companies in our sample complying with the requirements of the rules and several going over and above the letter of the law to provide additional useful information.

We found that mandatory reports for UK registered companies were generally easy to access from the Companies House Extractives website. And companies registered in the UK provided their reports in XML format, which made the output data on spreadsheets easy to analyse, although a preparer we interviewed did comment that the process of uploading this data in the format required by Companies House was difficult and required specialist IT input.

Analysis was more difficult for publicly listed companies required to comply but who were registered outwith the UK, as these reports tended to be in PDF and were not centrally deposited with Companies House but rather made available on individual company websites. Similarly where companies produced supplementary documents further explaining their contributions these were not made available along with the mandatory report deposited with Companies House but were rather made available on companies’ own websites.

In order to make the reports more accessible to civil society, a central depository would be extremely useful, this could be on Companies House or elsewhere but should include mandatory and voluntary filings from UK registered companies as well as filings from overseas companies publicly listed on the UK’s London Stock Exchange).

Our report makes several recommendations for improvements in the legislation. The addition of an audit requirement, at least limited assurance, and/or a requirement to reconcile the information provided to annual accounts would be progress, as we feel the reliability of the information would be improved by being audited or assured, and a reconciliation would better enable users to contextualise the payments within the broader company performance. To this end some companies provide reconciliations or further explanations of how key figures are calculated or how provisions have been interpreted. This additional disclosure was very valuable in allowing the data to be used to properly assess the economic contributions made by companies.

The rules could benefit from clarification in several key areas; namely the definition of when projects can be reported on an aggregate basis and when companies should report payments made under joint venture arrangements. The legislation, as it is currently drafted, potentially engenders several different interpretations in these areas in practice, which could result in a lack of consistency or potentially allow for manipulation of the rules, resulting in payments going unreported. Operationally we also feel that there is a lack of clarity surrounding who is responsible for administering these rules and ensuring compliance, as there currently appears to be no institutional mechanism by which non-compliance is identified and remedied (so that one would need to fall back on a cumbersome inefficient process of appeal to the Registrar and the Secretary of State).

Considering these rules in the wider context we also feel it is important to highlight that these mandatory requirements have been implemented in addition to the Extractive Industries Transparency Initiative (EITI). And for large companies will soon be joined by mandatory transfer pricing documentation requirements implemented under the Organisation for Economic Co-operation and Development’s (OECD) Base Erosion and Profit Sharing (BEPS) Action 13.

While all of these initiatives are positive, we would urge policy makers and civil society to take a wider view to ensure no duplication of effort and output as this is beneficial to both preparers and users. Despite these concerns raised, this commitment to transparency on a mandatory basis is an important step and one which should be embraced by civil society and companies committed to ethical, transparent business practices.

To those in the Publish What You Pay movement and activists pursuing greater transparency in the extractives sector, we urge you to access these freely available reports, to use the information in your advocacy and to feed back where the legislation could be improved. We already note here that there has been significant usage by NGOs of the first reports.

For companies preparing these reports, we encourage you to go above the minimum requirements of the rules and to explain the data supplied to allow for greater understanding of your contributions.

To the UK government, we would encourage you to clarify the mechanism for reporting non-compliance and to review your systems to ensure that they are streamlined to allow companies to comply with these important requirements without undue bureaucracy.

This law was a great improvement in relation to transparency and subsequently holding governments to account. It is a very positive statutory provision. Refinement in the way of clarification and improvement can be a further step forward. 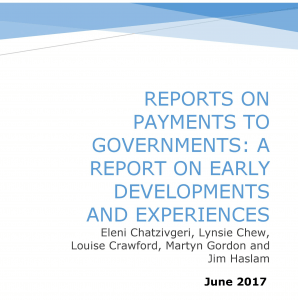 A note on the authors of this guest blog

Eleni Chatzivgeri, Lynsie Chew, Louise Crawford, Martyn Gordon and Jim Haslam are UK accounting academics whose research interests include the interface of accounting and wider regulatory forces and issues in enhancing accounting’s social relevance. Eleni is based at the University of Westminster and Lynsie at University College London. Louise and Martyn are based at Robert Gordon University and Jim Haslam is at the University of Sheffield. Jim and Louise are leading the project as academics with long experience in the issues of concern, including having authored a number of papers in this area.

Read the next article
Three years after ‘win-win’ negotiations, Niger still losing out to Areva