Declaring at global Summits, like the one held in Ottawa last week, that women’s voices need to be heard in open government in general, and in transparent natural resource governance in particular, is important.

After all, in addition to women currently being largely underrepresented in sector decision-making, benefits from natural resource exploitation accrue mostly to men while the costs in relation to family and social disruption, loss of land, increased gender-based violence and environmental degradation fall mostly on women. 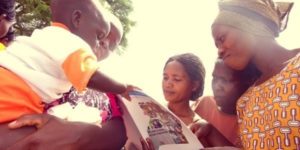 And yet, grassroots women’s organisations and movements in resource rich countries have been vocal on these very issues for decades. They have been fighting for women’s economic empowerment, political participation and combating gender-based violence – all which are aggravated by a gender blind natural resource sector. They have been involved in pushing for peacebuilding where illicit trading of minerals and corruption have propped up warring parties that use rape as a weapon of war. They have argued – not that women are victims – but that systemic inequalities stop them from being a positive force for change.

They just haven’t been heard in platforms like the Open Government Partnership (OGP) or the Extractive Industries Transparency Initiative (EITI) which typically have engaged civil society (not necessarily women’s organisations) in finding more technical solutions to largely systemic and political inequities, leading to sustained gender inequality.

That is, maybe until now.  Maybe this is the turning point.

It requires, however, for aspirations on breaking gender roles of the 2019 OGP Summit to be translated into action, backed by political will and openness to learning from actual investments in gender-focused national action plan commitments (NAPs). This may be hard since both OGP and EITI are embedded within socio-cultural and political contexts, most of which historically have excluded women.

So how do we collectively support this effort?

One way is to insist that women’s organisations have the resources necessary to engage in the consultative processes surrounding OGP and EITI, building their technical and procedural capacities along the way (be it to access data, increase analytical capacities, or turn up at consultations in places and times that may not always be convenient). Another, potentially more effective and far-reaching way, is that OGP, EITI and other national and international mechanisms geared to advancing gender equality find new ways to collaborate. This will require sector interests to learn from front line women’s rights activists on their own terms, and to invest in their accumulated expertise.

One session at the OGP Summit, organised by Publish What You Pay (PWYP) Secretariat, Extractive Industries Transparency Initiative (EITI), Oxfam America, Natural Resource Governance Institute (NRGI), Development Gateway and Global Affairs Canada did just that, flipping the narrative to actually learning from those at the front lines of women’s rights.

With prominent women’s rights activists, researchers, indigenous women and civil society representatives from resource rich countries around the globe sharing their experience, the session gathered over 100 participants from across government, civil society and the private sector in five parallel and simultaneous conversations. Each group tackled a particular issue among the following themes:

The task was to listen, learn, and co-create draft OGP National Action Plan (NAP) commitments that governments could use to transform entrenched gender inequalities, using the open government agenda.

Government representatives helped keep the levels of expectation at realistic levels, while civil society (particularly women’s rights groups) provided useful contextual inputs. Yet even the conversation focusing specifically on how to bridge women’s rights movements with that of natural resource governance had only a few women’s rights groups present, mostly as speakers. This is not surprising. 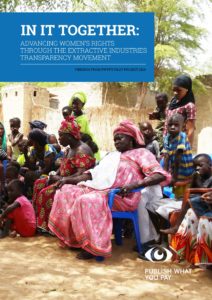 A research report launched by Publish What You Pay at the OGP Summit, drawing on gender scans conducted by national coalitions in six West African countries, illustrates that although women’s rights groups and gender expertise exist on the ground, these organisations rarely see their issues reflected in EITI consultation processes. Lack of funding, incentives and mechanisms to meaningfully engage were among the reasons given. Intentionally investing in strengthening homegrown national women’s movements could help address this.

Despite the fact that the session brought together virtual strangers, with their own agendas, interests and contexts, at the end of the hour, we did it. We generated five model open government National Action Plan Commitments on advancing gender equality in natural resource governance.

Imperfect as these commitments may be before their national contextualisation and adoption, they demonstrate that it is possible for government, civil society, and women’s rights activists to come together and generate practical and actionable joint commitments – particularly if we do not just make women’s voices heard, but also start to listen. To track progress over time, the recent gender research conducted by Publish What You Pay, supported by the Hewlett Foundation, developed a methodology for monitoring how these aspirations gradually turn into action.

We are now left with the doing, and this is no small task.

This is a time when separate constituencies concerned about transparent and gender-inclusive natural resource governance converge in their aspirations on advancing gender equality. It may be our critical juncture. Let’s move forward without speeding past it.

Read the next article
What are our key priorities at the EITI Conference in Paris?