In 2021 PWYP’s national coalitions secured significant successes despite the ongoing COVID-19 crisis hindering their networks, a survey of PWYP National Coordinators has found. The survey, which was carried out in February 2022, reveals coalitions’ progress on the five strategic outcomes which form the bedrock for PWYP’s Vision 2025 strategy, our roadmap towards a world where everyone benefits from their natural resources. 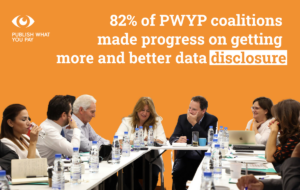 Particularly noteworthy was the network’s continued success in pushing for new data disclosures during the year. There was specific progress on contract disclosure, a potential result of the PWYP global #DiscloseTheDeal campaign that was launched at the end of 2020.

32 out of 39 National Coordinators (82%) stated that their coalition made at least some progress in securing more and better data.

For many coalitions, keeping the Extractive Industries Transparency Initiative (EITI) process ‘alive’ was a challenge and victory in itself. In the Middle-East/North Africa (MENA) region for example, in the face of  direct and indirect efforts by ministry officials to stop the Iraqi government disclosing monthly and annual export and revenue figures on commercial grounds, the Iraqi coalition’s determined campaigning ensured they were maintained.

In Eurasia, the Ukraine coalition helped get highly progressive legislative changes, aligning the country with the EITI’s reporting requirement on contract disclosure and ensuring that companies who fail to report are sanctioned.

In the Central Africa region, the Democratic Republic of Congo (DRC) coalition’s tireless work over many years, meant that 90% of the contracts signed between companies and the state were made public. Meanwhile, in the East and Southern Africa region, PWYP Uganda reinforced and amplified the call for contract transparency through the #DiscloseTheDeal campaign.

Despite many coalitions’ advocacy work being constrained by COVID-19 restrictions and pressure on civic space tightening generally, important governance victories were achieved in 2021.

Some of these were ‘system’ level impacts. In the Central Africa region, the Republic of Congo’s coalition succeeded in ensuring that the urgent need for broader disclosure through the EITI was discussed during the national negotiations on IMF loan extensions. The Congo coalition also successfully advocated for ending the tax exemptions that extractive companies enjoyed.

National coordinators also outlined community-level governance impacts. In Francophone West Africa, the Mali coalition trained communities, including women and vulnerable groups, to challenge the authorities on the amount of revenue they receive from local extractive projects, and the decisions about how the revenue is spent.

In the Asia-Pacific region, the Indian coalition exposed how funds which were meant to benefit local communities were being misappropriated, prompting action from the government agency responsible.

In other instances, securing better governance was less about using ‘data’ and more about supporting communities to seek redress for the damage that extractive projects inflicted on their communities and livelihoods. In the East and Southern African region, the South Sudan coalition helped communities secure emergency assistance caused by flooding. 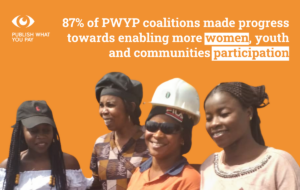 Most National Coordinators responding (33 out of 38, 87%) rated that their coalition had made some progress towards the PWYP strategic outcome of enabling communities, women and youth to participate more actively in extractive governance – despite COVID-19 constrictions on meeting and mobilising.

In Francophone West Africa, the Togo coalition helped empower women villagers to speak up against company agreements, resulting in the government acceding to the villagers’ demands.

There were also signs that coalitions were strengthening women’s representation on their management boards, although women remain significantly under-represented. The global gender policy which the International Secretariat is developing will help address this.

Much of the collaboration between coalitions took place at the regional level, including strong cross-coalition exchange work in the MENA and Eurasia regions.

Coalitions also collaborated through issue-led webinars, such as the Asia-Pacific workshops on energy transition.

While some coalitions teamed up on advocacy – including those from Australia and India who worked with groups in Myanmar to advocate for disinvestment from extractive projects there –, overall there was a dip in the proportion of National Coordinators saying that their coalition had conducted joint advocacy actions with sister PWYP coalitions (29% in 2022 relative to 45% in 2021).

This may be because, while coalitions continue to plan together and learn from one another, advocacy targets and actions, for example for the #DiscloseTheDeal campaign, remained mostly national. 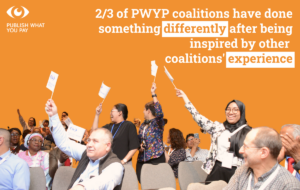 A high proportion of National Coordinators said that their coalition was inspired by other coalitions (71%) and had done something differently as a result (61%). Regional meetings and webinars continued to serve as fertile breeding grounds for exchanging ideas and lessons.

Building on surveys since 2020, we know that there are more opportunities to strengthen network learning and advocacy, especially through capacity building on advocacy strategy and theories of change, as well as through more knowledge sharing about what works and what does not.

We hope that the ongoing PWYP strategy mid-term review will add to our collective learning while assessing our progress towards Vision 2025. The National Coordinator surveys will contribute a useful data point in informing this.

Read the next article
Get ready for PWYP Global Assembly 2022 !