Publish What You Pay UK has published Comparing UK EITI and Mandatory Payments to Governments Data for 2016, an assessment of payments to the United Kingdom government made in 2016 as reported by oil, gas and mining companies operating in the UK. PWYP UK’s 12-page report compares data released via the UK Extractive Industries Transparency Initiative (EITI) with payments disclosed under UK and other European Union member state regulations implementing the EU Accounting and Transparency Directives’ country-by-country reporting requirements for extractive companies.

PWYP UK undertook the study to understand better how the EITI and mandatory reporting complement each other in practice – the two regimes are intended to be, and in many key ways are, complementary – as well as to explore a sample of extractives data in greater depth and to contribute to discussions about “mainstreaming” or “systematic disclosure” in the EITI.

This data assessment investigates the degree of consistency between extractives companies’ total disclosed payments to UK government entities in 2016 as reported under the two transparency regimes, and the extent of and reasons for major variances. Outside of Norway, which has begun to practise “systematic disclosure”, this UK-focused study may be the first of its kind at country level.

Initial findings and dialogue with companies

Of 58 extractive companies reporting via the UK EITI on 2016 – the most recent year for which data was available in September 2018 – 29 had also published a corresponding mandatory payments report. Data published by 16 of these 29 companies showed variances of less than 10% between the two sets of total reported payments to UK government entities. The remaining 13 companies’ data displayed statistically more significant variances, ranging from just under 12% of the company’s total reported UK EITI payments to more than 9,000%, and in money terms from £0.36 million to more than £40 million. 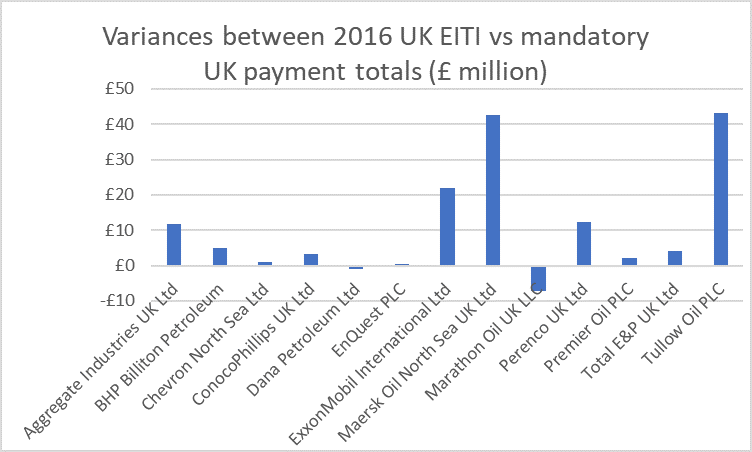 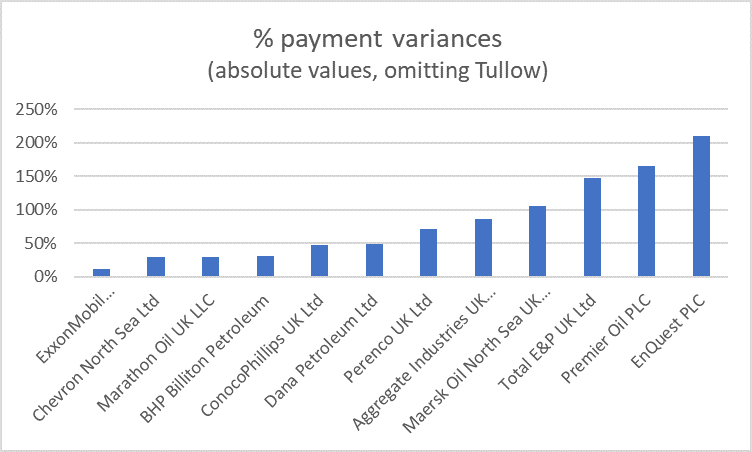 After eliminating obvious potential reasons for the variances as far as possible, PWYP UK contacted the 13 companies concerned, in several cases via the industry body Oil & Gas UK, to request clarification. Most companies were willing to provide enough information to fully explain differences between the two data sets.

Reasons for the data variances and conclusions

Dialogue with companies was needed to understand the variances completely. Explanations received show that differences of scope between the two transparency regimes determining how some main payment types were reported are significant, although the specifics vary. Companies have confirmed that the main factor is the inclusion or exclusion of subcategories of payments and of interest and negative payments (refunds), especially relating to taxes. In some cases, inclusion of subsidiary companies in UK EITI reporting that were not included, or that disclosed separately or for less than 12 months, in mandatory reporting is also a factor, as are differences in reporting period and – most easily resolved – in currency exchange rates applied.

The extent to which similar issues arise in other countries that implement the EITI, and where operating companies also report payments under mandatory disclosure rules – either in the UK, other EU member states, Canada or Norway – remains to be seen. Lessons from Norway’s experience with systematic disclosure will be useful.

Both the EITI and mandatory payments to governments reporting provide hard-won mechanisms to deter corruption and mismanagement, and opportunities for citizens of resource-rich countries and other oversight actors to hold governments and companies to account for their stewardship of the planet’s non-renewable natural resources and of the resulting financial flows. Civil society organisations, parliamentarians, journalists, investors and companies themselves can reap important public benefits from the two extractive industry transparency regimes. Comparing EITI vs mandatory reports is only one of numerous approaches to using extractives data that civil society is currently exploring as part of its work to bridge the gap between extractive industry transparency and full accountability.

Read the next article
PWYP Eurasia members meet in Azerbaijan